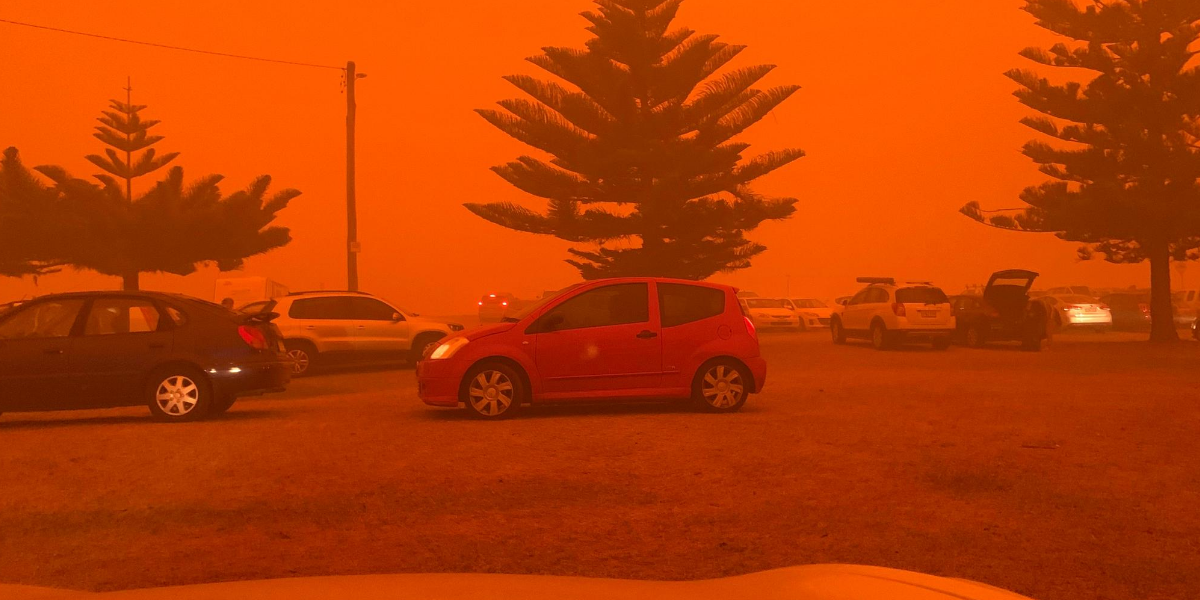 How does an electric vehicle cope in a bushfire?

Garry Thorpe bought his first electric vehicle, a Tesla Model 3 SR+, in November last year. Never did he think it would save his family in a bushfire.

Garry’s choice to invest in an electric vehicle was easy. “For us, getting a Tesla was very much for environmental reasons,” he says. “I’m an environmental advocate, and I’m very concerned about the damage we’re doing, and the costs that are going to be left to our children and grandchildren.”

For electric cars, all you need is a power point. But the thought of running out of battery while you’re on the road – known as Range Anxiety – is enough to put people off.

In December 2019, on a trip to Bateman’s Bay on the south coast, Garry got caught up in the bushfires that ravaged New South Wales. Electricity was cut and petrol was extremely hard to come by.

“We have a house near Batemans’s Bay, so we all travelled down on Boxing Day for an extended family get together,” Garry says. “There was quite a mob of us – 18 all together, with our three children, their wives and partners, and the 10 grandchildren.”

When they arrived, Garry charged the car from a general power outlet, getting it up to about 80%. He made a few trips to the shops and to the beach, always plugging it in back at the house.

At the time, huge swathes of the country were on fire. On New Year’s Eve, the bushfires hit Bateman’s Bay.

“My wife used to live in the Blue Mountains, so she’s been through a few fires,” Garry explains. “On that Tuesday morning, she got up and said ‘Listen to the bush. Is it normally this silent at 6.30 in the morning?’. The bush was eerily still; it’d usually be alive with the chatter of birds and insects.”

Garry checked the radio and the threat was on. Their property wasn’t fire safe and they evacuated to nearby Batehaven.

“We charged up the car, and told our kids to make sure they stopped to get fuel on the way.” One stopped for petrol, the other didn’t, and Garry set off with a fully charged car.

There were thousands of people on the beach at Batehaven. The wind was blowing in from the sea, so the air was decent and visibility was relatively clear.

Everyone watched as helicopters and spotter planes circled above. Occasionally, over the ridge, a gas tank would explode, and a burst of flames would leap into the sky.

“We knew that if the wind changed, we’d be in thick smoke in no time, so we were all prepared to retreat to the cars,” Garry recalls.

“Well, that’s what happened. We spent about three hours in the cars, running the air conditioners because it was stinking hot. The Tesla’s AC runs quite happily off the battery – we were very comfortable, and the car sealed very well. It was a nice little safety capsule, really.”

A few hours later, they were able to head back to their homes. Remarkably, their place was still standing; the fire had come within a few blocks.

The power was still out and embers were blowing across the sky. Garry and his family made the decision not to stay. All 18 family members, including the family dog, headed to the local golf club and slept on the floor. Garry made several trips in the Tesla, ferrying people back and forth, and collecting supplies.

By the next morning, the car was only down to 65%. It was safe to return to the house, but the power was still out. Garry’s son tried again to find petrol with no luck. He had to set his alarm for 3am to find a service station that was powering off a generator. Garry, on the other hand, took the Tesla to an NRMA 50kW charger and got it back up to 80%.

On the third of January, four days after the fires hit, Garry and his family finally returned home. They stopped for a quick battery charge on the way at Cooma, and arrived in Canberra with a 25% charge in the car.

“At no point we were worried about running out of charge; our son was definitely more concerned about not having petrol,” Garry says. “There’s generally always electricity somewhere; if the power’s out in your suburb, you can usually plug in a few suburbs over. Anywhere there’s electricity – even just a power point – there’s power for your car.”

As Garry said in his post in the Electric Vehicles for Australia Facebook group about the experience, "In a disaster, both power and petrol are rapidly unavailable. When power is restored, fuel is hard to come by. My experience was that I could get a "full tank" before the crisis arrived, and as soon as the power was back on, could get a "full tank" easier than petrol. The car AC was brilliant, you can run it for hours with hardly any power drain."