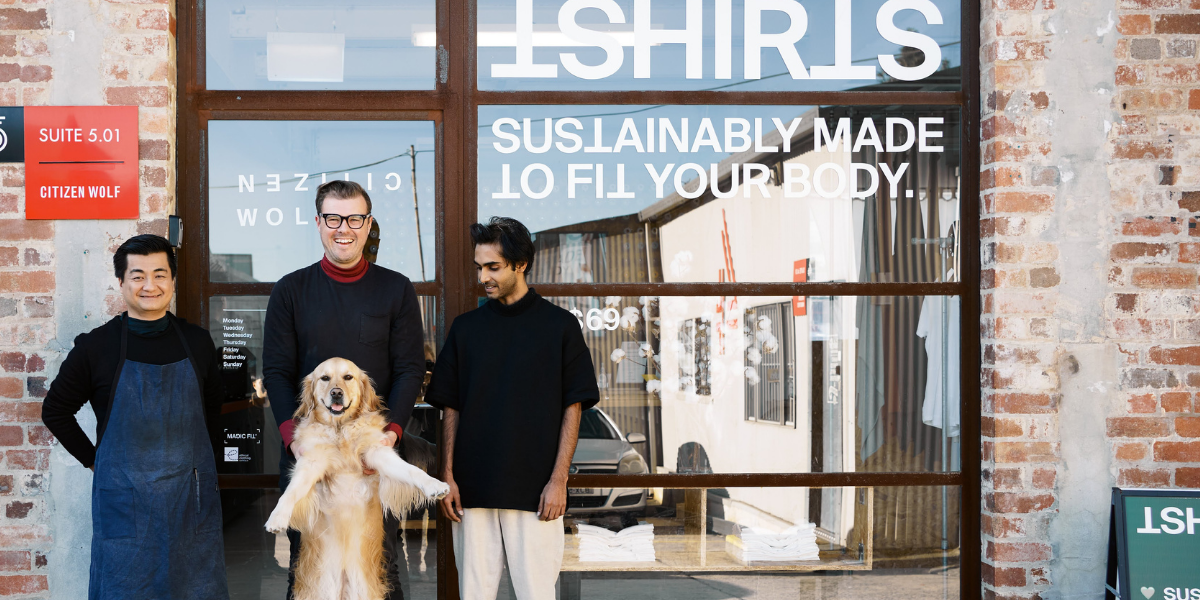 November 24, 2021
December 17, 2020
Why is it so hard to find clothes that fit? That’s the question that led Zoltan Csaki and Eric Phu to found Citizen Wolf, a t-shirt company and Bank Australia customer that fits our ethics perfectly.

Have you ever bought a t-shirt, worn it for a few months, and found it to lose its shape, sag off your shoulders, and generally start resembling more of a tea towel than a t-shirt?

It’s one of the many problems of fast fashion: mass-produced items that are made quickly – often using cheap materials and even cheaper labour – and sold for peanuts in high street stores. Fast fashion isn’t made to last. In fact, around 66% of these items end up in landfill within 12 months. That’s two out of three pieces of clothing. That’s not OK.

Here’s where Zoltan Csaki and Eric Phu, founders of Sydney-based t-shirt company – and recent recipients of B Corp certification – Citizen Wolf step in. They’re on a mission to make mass-produced clothing obsolete.

“The survival of our planet depends on that system [of fast fashion] changing,” Zoltan says. “The big players aren’t going to make those changes because it’s serving them and their shareholders quite well.”

So what is Citizen Wolf doing differently? Well, they’re re-engineering the way clothes are made at scale, ensuring that every piece of clothing they produce is carbon negative. “We do generate carbon in the manufacturing process,” Zoltan explains, “but after doing an audit, we actually produce around 48% less carbon than that traditional, mass-production process.”

Citizen Wolf also offset every kilo of carbon of carbon they create by five, so they can legitimately say that each t-shirt is carbon negative.

Then there are the offcuts. While around 30% of all fabric ends up on the cutting room floor as scrap, Zoltan and the team have ensured that none of their offcuts go to landfill through their Zero Waste collection. “We patchwork up those scraps to create bags and scarves,” he says. “We’re also able to turn it into knitting yarn, of all things, which is really cool.”

Citizen Wolf also offers a Magic Fit service. Key your height, weight and age into an online order form, add any relevant notes – like, I don’t like pockets, I have a long torso, I prefer a loose fit – and your T-shirt is customised to exactly what you like. It means that everything is made to order, the team isn’t sitting on stock, and there’s no waste. Your details are saved, so you can order your perfect T again and again.

And if your shirt doesn’t fit, for whatever reason, it’s really easy for Citizen Wolf to tailor it until it’s just right – for free.

Citizen Wolf is Ethical Clothing Accredited, which means their seamstresses are all paid above minimum wage. They also prioritise Australian-made fabrics, with around 85% of their materials knitted in Melbourne. “It’s more expensive, but we believe in maintaining the local industry,” Zoltan says. “It’s really important that we’re paying Australian wages and keeping as much money in our economy as we can.”

Last year, Citizen Wolf started the process to become a B Corp, and have just received their accreditation. “We knew we were doing the ‘right thing’, but B Corp has allowed us to really benchmark ourselves, in terms of sustainability and ethics, against some of the best companies in the world,” says Zoltan.

They’ve just switched their banking to Bank Australia, after discovering that we’re B Corp-accredited too. “Seeing a bank that said they were going to fund renewable energy and social housing rather than fossil fuels and animal exports is what got us over the line,” Zoltan says. “It’s been really lovely to see a bank zagging while everybody else is zigging.”

Find out more about our journey to becoming a B Corp.