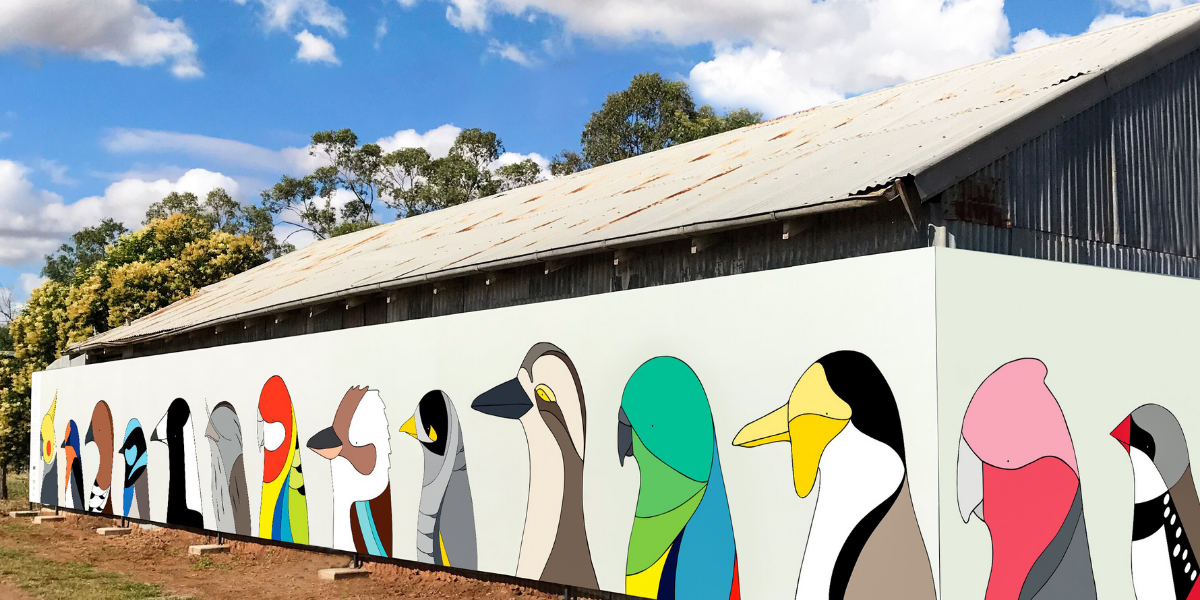 How 2 artists made people care about conservation

November 24, 2021
May 25, 2021
The duo behind Eggpicnic is using their design skills to raise awareness for critically endangered birds in Australia. We sat down for a chat.

Eggpicnic is a little bit different to most design studios. Rather than designing logos, websites and annual reports, Eggpicnic is devoted to wildlife conservation. Camila De Gregorio and Chris Macaluso, the Canberra-based pair behind the studio, create illustrations, sculptures, and large-scale installations to raise funds and awareness about critically endangered species, particularly birds, in Australia.

“We use our work to help people fall in love,” says Camila, “because that’s when people want to protect.”

Camila and Chris met in Milan in 2009 and immediately connected over a love of nature and a mutual concern about the future of the environment. They moved to Chile, where they experimented with design and learned from local artisans, before relocating to Australia 10 years ago.

“When we arrived in Sydney, that’s when my interest in birds really began,” Camila says. “We joined our local bird club and started learning about birds, and about the threats they – and other wildlife – are facing.”

The pair started playing with different mediums – illustrations, paintings and art toys in bright block colours – to share what they were learning with the public.

“People started showing interest in our work, because it was relatable,” Camila says. “It was communicating these issues, but from a joyful perspective. It was inviting, rather than doom and gloom. It gave people hope.”

For Camila and Chris, creating these striking works showcasing critically endangered birdlife was a new way of reframing traditional perspectives of conservation. They use art as a way to get people excited – and educated – about Australian wildlife species.

“We knew we needed to do something,” explains Camila. “As communicators, we wanted to make a difference through our work, and use our work as a tool to make changes.”

Along with supporting wildlife organisations like BirdLife Australia, Difficult Bird Research Group and WIRES, Eggpicnic have been working with scientists to quantify the impact art can have on conservation.

“We’ve developed a survey, in collaboration with Dr. Kate Umbers from Western Sydney University, that will give us insight into how much people know about a species, the threats they face, and how emotionally connected people are to that species,” Camila explains. “That then gives us insight into how we communicate these issues with people to help them engage, actively participate, and help shape a better future.”

One of Eggpicnic’s favourite projects was a public art piece – titled Birds of Caragabal – near Grenfell, 370 kilometres west of Sydney.

“We were taking part in a Key Biodiversity Area survey and met with a councillor who asked what we did,” Chris says. “We showed him what we’d been working on in Sydney and he loved it. He said ‘We’ve got to bring that here’.”

The project involved a collaboration with the local public school. Each child was given a local bird that they had to research, and then present their findings back to the class, arguing why their bird should be included on the Caragabal Bird Mural.

In all, 18 local birds were showcased in the mural on the town’s main road. It’s a talking point for people coming through, and the town has a sense of pride in the work itself.

“The community and school kids came together, they chose the species that went up, they have ownership,” Chris says. “They want to go out and search for those birds, and learn more about them. The ripples of the project have been incredible.”

Find out more about Eggpicnic’s mission – and order yourself a print (or two).