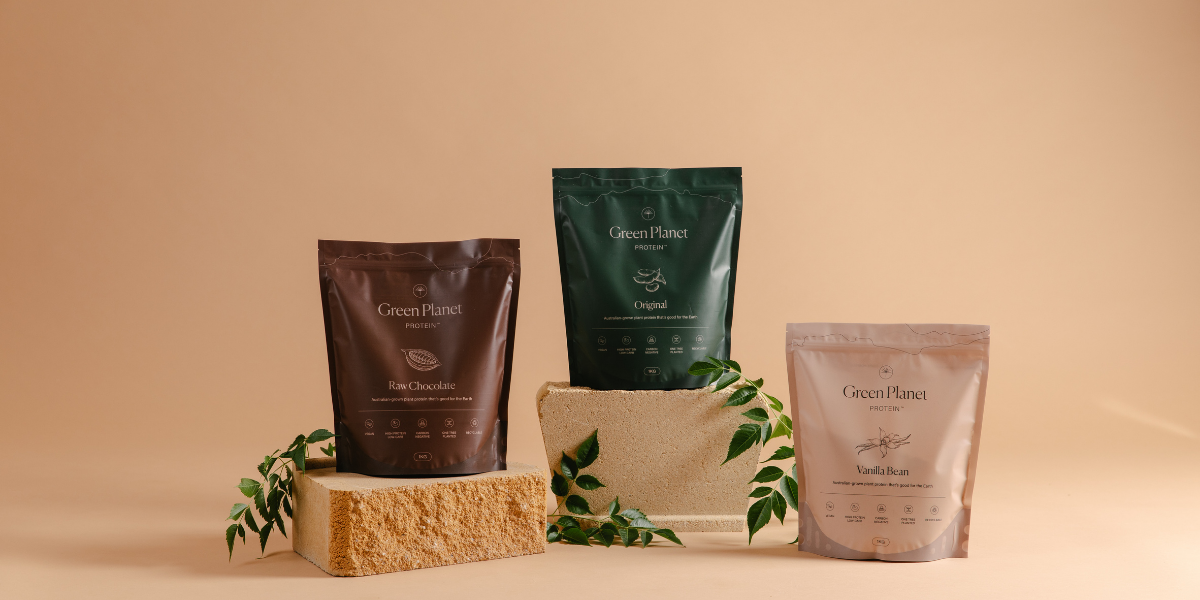 November 24, 2021
August 24, 2021
When Luke Stevanja couldn’t find a plant-based protein that was good for the planet, made with local ingredients and actually tasted good, he decided to make his own. Here’s how Green Planet Protein is helping fight the climate crisis.

Around a quarter of the world’s greenhouse gas emissions come from the food supply chain. The biggest contributor? Animals. The emissions coming from cows, pigs and chickens are among the planet’s biggest polluters, but they’re also the planet’s most common protein sources.

This alarming statistic is what drove Luke Stevanja to found Green Planet Protein, a plant-based powdered protein company. “Learning about this over the past few years, I became very conscious of my diet and started to substitute plant-based options over animal ones,” Luke explains. “Some products – like swapping cows milk for oat milk – were easy, but some products were much more challenging.”

One of the trickiest substitutes for Luke to make was protein powder. Most powders contain whey protein, a dairy product that’s unsustainable. After trying around 10 vegan protein powders and not liking any of them, Luke – who has a background in food – decided to make his own.

“I view greener sources of protein as a really important tool to reduce our emissions and help in the battle against climate change,” he says. “By eating smarter, and having better plant-based options available, we can make a dint in the emissions targets.”

Unlike other plant-based proteins (which are generally made using pea or rice protein) Green Planet Protein is made from pulses – namely, fava beans, “which sounds gross, but the taste is really neutral,” says Luke.

Pulses like fava beans are about as sustainable as it gets for a plant-based protein source. They don’t require much land or water, they have a low carbon footprint, and they’re grown locally so have low food miles.

“Most other vegan protein powders are made from imported products, so when they’re coming to somewhere as remote as Australia, they’re travelling vast distances and using a huge amount of fuel,” Luke says. “If you look at pea protein, the peas are generally grown in North America, exported to China where they’re turned into protein, then sent to Australia where it’s blended with other ingredients.”

For Luke, it’s important for people to focus on where the ingredients in their food are coming from. “We can reduce the environmental impact of our food before we even change what we eat.”

Green Planet Protein is a carbon-negative business, offsetting their emissions through the Carbon Reduction Institute. Each quarter, the Institute calculate the impact of Green Planet Protein’s activities, which then contribute to funds – like a solar energy project in Mauritius and an initiative providing water filtration devices to people in South America – to offset that number 10 times over. “So, if we emit 10 tonnes of carbon, we’ll offset 100.”

The team also work with One Tree Planted who plants a tree for every pack of protein sold. “They’re planting a really biodiverse range of trees in northern New South Wales in an area that was badly damaged by the bushfires, with the view of restoring that habitat to what it was,” Luke says. “It’s an important koala habitat too, so that’s another reason we love giving to that project.”

Luke has been a Bank Australia customer for three years, making the switch when he started considering what he could do on a personal level to help fight the climate crisis. Along with changing banks, he switched to an ethical super fund, moved to a carbon-neutral broadband provider, and started using Sendle, a carbon-neutral courier, to send out orders.  “We can all be proactive and enact change straight away,” he says. “We don’t need to wait for legislation or new technology. It’s something we can do today.”

Meet our other customers like Luke or find out more about Green Planet Protein.