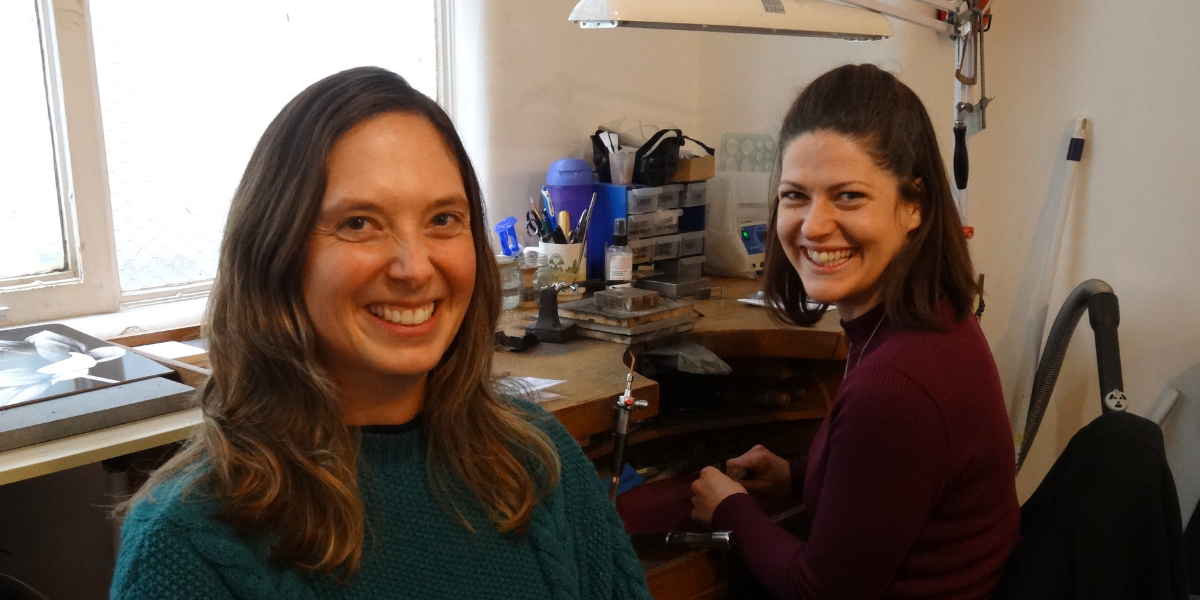 What is sustainable jewellery and why is it important?

November 24, 2021
July 21, 2021
When we talk about mining, we don’t often think about the jewellery industry, which can be just as exploitative on the earth’s natural resources. But Megan and Jenna – from Megan Webb Jeweller – are on a mission to change that.

When we think about mining, we tend to think about coal, right? But what about gold and diamonds? It still takes its toll on the earth’s resources, but rarely gets a look-in when we talk about mining.

Megan Webb, founder of Megan Webb Jeweller in Melbourne’s CBD, is on a mission to change that. How? By using sustainably sourced materials. When she first started out as a jeweller, some 20 years ago, there wasn’t anyone else in the industry using responsibly sourced materials. “I couldn’t understand why,” Megan says. “We’ve already dug up so many natural resources, and they’re all reusable, but we just keep digging up more and more.”

So why does this idea of sustainable jewellery matter? Apart from the environmental impacts of mining, there’s also the huge amount of energy it takes to refine virgin gold.

“A lot of people think that you just dig up a nugget out of the ground, melt it down and away you go, but that’s not how it works,” Megan explains, adding that chemicals and resources need to be used in order to extract the gold and bring it to a form that can be used to work into jewellery. Megan and Jenna manufacture their pieces using 100% recycled gold, silver and platinum, which still require energy to get it to a workable form, but significantly less than virgin metal.

Then there’s the humanitarian impact. Blood diamonds (which many of us are familiar with, thanks to the 2006 Leonardo DiCaprio film of the same name) are stones that have been mined in a warzone, sold and then used to finance a warlord’s activity.

While it’s unlikely anyone in Australia would unknowingly purchase a blood diamond – thanks to the efforts of the Kimberley Process, a worldwide organisation working to stem the flow of diamonds from conflict areas – Megan ensures that any non-recycled diamonds she sources comes with an Australian or Canadian certificate of origin, which means their journey from mine to consumer is traceable.

Given the market is flooded with gold, diamonds and precious gemstones, Megan made the decision to reuse materials wherever possible. And if they can’t reuse and recycle materials, the jewellers only use stones with known origins.

“I didn’t like that we were making beautiful pieces of jewellery, meant to passed from generation to generation, that had this big negative impact when it’s possible to make it without,” she recalls. “We take so much pride in hand making everything ourselves, so it made no sense that we’d then not care where the materials came from.”

Megan and business partner Jenna create one-of-a-kind custom pieces using ethically sourced materials and they do almost everything – from designing the perfect piece of jewellery to manufacturing it – from their Melbourne studio.

Most of the diamonds Megan works with on customer pieces are recycled; antique, old-cut diamonds and modern-cut stones that have been previously set into jewellery. However more and more people are asking for lab-grown diamonds.

“The techniques for creating diamonds in a laboratory are quite sophisticated now,” Megan says of the stones, which are around 30% cheaper than mined diamonds. “It’s very difficult to tell one that’s been mined from the earth and one that’s been grown in a lab.”

Another option (which is even cheaper than lab-grown diamonds) is Moissanite, a naturally occurring element that can also be reproduced in a lab. “It’s not a perfect equivalent, but has a lot of similar characteristics and is a good substitute,” she explains.

Megan’s other great love is Australian sapphires, which she sources from independent fossickers and cutters around the country. And as sapphires are alluvial (gems that have been deposited by running water), a number of stones currently in circulation have been collected from riverbeds and creeks, which means that no digging is required at all. “They come in all shapes, sizes and colours, and are extremely durable,” she says. “They’re the only coloured stone we recommend for everyday rings.”

Megan tries to live her life with as little impact on the planet as possible, which is why she made the switch to Bank Australia six years ago. “I was with another bank for a few years when I first opened,” Megan says. “Bank Australia explained to me that ethical lenders are lot stricter about accepting new businesses, but I switched to them as soon as I could. A few years later my partner and I switched all our personal banking to Bank Australia as well.”