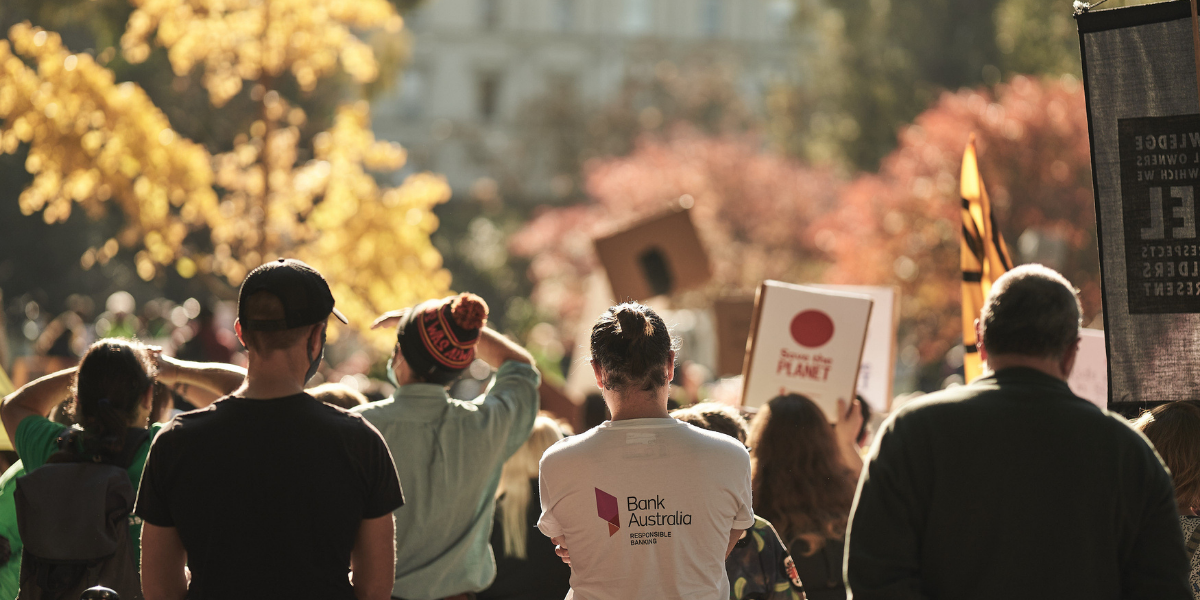 Why we marched with School Strike 4 Climate

Why is it personally important to you to support the kids at this climate strike?

They’re not getting a lot of support from the existing systems, and the people who are meant to be looking out for them. So I think it’s important for everyone and anyone who cares about the future that these kids have to get out and support them on the things that they think are important. And climate change is an extremely important thing for everyone to care about – but especially if you’re a young person.

What does it mean to you to work for an organisation that doesn’t just give you permission, but actively encourages you to get out and march in the streets?

The stress and anxiety that comes with doing work that doesn’t align with your values…you always have that tension, and that discomfort with turning up to work every day. I don’t have that. My workplace is supportive of the things I believe in, and allows me to pursue those things – even if they are outside of my role.

It’s easy to get caught up in the doom and gloom when thinking about the climate – what gives you hope for the future?

The fact that we have thousands and thousands of future leaders turning up to these climate rallies. These are the people who are going to carry through these ideas of change. It’s not the people in power now. These kids are the ones who are going to make the world a better place. The more we can support them, the better.

How important is it for you to work for an organisation that supports you taking to the streets to demand climate action?

It’s really important to me, to work for an organisation that’s aligned with my values and supports us to take a day and be a part of this. Not just allowing us to come, but wanting us to represent the bank and to wear the brand on our t-shirts. I think it’s a good sign of the bank walking the talk. We’re a part of the change.

What kind of things give you hope in the fact of so much doom and gloom when it comes to the climate?

For me, there’s probably two things: the first is how inspiring it is, the students and the young people who are leading this today. The fact that they’re going to be our future leaders. I think that’s incredibly inspiring, and the movement they’ve built and the amount of people they’ve been able to mobilise is fantastic.

I think the other thing is that we actually have the solutions to a lot of our climate problems. That gives me a lot of hope – it’s just a matter of actually creating that sense of urgency for the government to take action, and to move these solutions forward to make the right investments.

Why is it important to you to be out here on a day like today, supporting the kids as they strike for climate action?

It’s hard to sum up. There’s this incredible wave of goodwill and support. I’ve seen young people – really young people – encouraging elderly people that we’ve seen out here today. I’ve seen older people encouraging the younger. It’s really cutting through and showing that people can be unified; there’s a dignity of the human spirit in it.

And how important is it to you to work for an organisation that supports you being out here like this?

Very. I’ve worked for retail banking, one of the Big Four, in the past. There’s a particular sense of coldness in that world, and I was actually hesitant to even go for this job. But it doesn’t have that same coldness. I’m working for an organisation that’s ethical, and that cares, and that makes a huge difference. Everybody just respects each other, and our environment.

What kind of things give you hope in the face of the climate crisis?

I think people always prevail. Revolutions become necessary when there is a crisis, and I just think you have to believe that goodness will override the bad in the world. And it might not happen immediately, and it might take time, but I really believe that’s true.